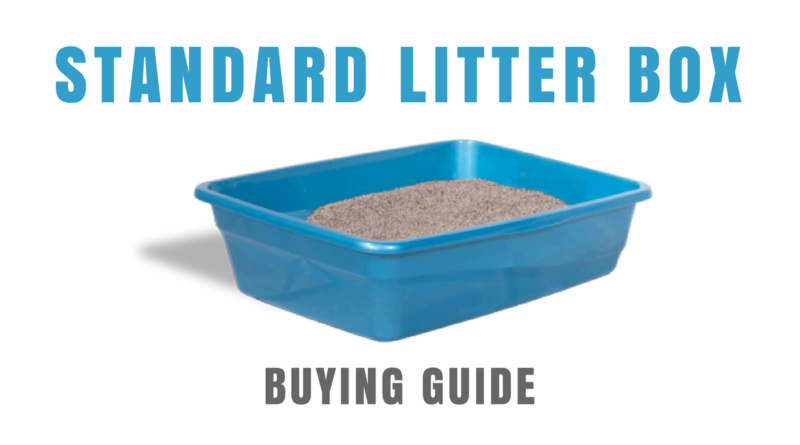 Scooping poop is by far our least favorite part about owning a cat. Keeping the litter box clean can be anything from a minor inconvenience to a dreadful chore, depending on several factors. But it has to get done for your cat’s sake and to keep your house from smelling gross.

Litter boxes have changed quite a bit over the past several years. We’ll take a look at the most popular designs and highlight some of our favorite features.

Pretty much every cat owner has seen or owned a standard litter box at some point in their lifetime. These litter boxes are non-automatic and have virtually no frills. But they get the job done. Within this category there are still a multitude of options to consider, like size, wall height, open or covered, material type, side-entry or top-entry, and discreteness. Some of the fancier non-automatic litter boxes have sifting mechanisms while others use disposable trays.

On the cheap end, you can pick up a pretty decent litter box for under $10. On the opposite end of the price spectrum, you could pay as much as $100 for one of these non-automatic litter boxes. If you’re willing to spend over $100 on a litter box, we suggest you head on over to the Automatic Litter Box Buying Guide.

How Many Litter Boxes Do I Need?

The rule of thumb is that you should have enough litter boxes for every cat in the house, plus one. So a 2-cat household should have 3 litter boxes. For multi-cat families, the price adds up quickly. If you’re not very diligent about cleaning the litter box, play it safe and get an extra litter box. It’s always better to have too many than not enough!

Kittens grow up really fast. Save yourself the headache of having to immediately replace that tiny litter box, and start off with a large one. Bigger is almost always better when it comes to litter boxes. If you skimp on size, you’ll end up paying the price with accidents and litter getting tracked all over the house. Your cat should have plenty of room to fully turn around inside the litter box. Here’s a table that compares the size and litter area of our top-rated litter boxes.

Open, Closed, or something in between?

There are pros and cons to having an enclosed litter box. It may take your cat a bit longer to adjust to this type of litter box. Or you might find that they actually prefer the privacy. Enclosed litter boxes cut down on the amount of kitty litter that gets tracked outside of the box. They are more efficient at trapping odors. And they are more visually appealing than an open box of sand. But they also require an extra step when it comes to cleaning. In most cases you’ll have to un-latch the lid to remove the top. And if the kitty litter is out of sight, you might not be as punctual about cleaning it regularly.

There is a third option – the high-sided open litter box. You get the benefit of reduced litter tracking, but without the hassle of having to unlatch and re-latch a lid every time you clean the litter box. If your cat has a habit of peeing while standing up, you’ll definitely want to find a litter box with extra high walls.

Side Entry or Top Entry?

Some of the newer enclosed litter boxes on the market are top-entry. These litter boxes are even more efficient at reducing litter tracking. They are also great for families with curious dogs who have the habit of eating cat poo. Due to the increased challenge of entering these boxes, top-entry litter boxes may not be ideal for large cats or elderly cats. Side entry litter boxes are the most common and probably the safest bet if you’re undecided.

Before you buy a litter box, consider where you plan to put it. Most litter boxes are rectangular or square. The better ones tend to take up quite a bit of floor space. There are also a few litter boxes on the market that are triangular, so they fit well in corners. Your cat will most likely not care what shape litter box you choose, as long as it’s big enough. So it is up to you to decide between the standard rectangular box and the space-saving corner litter box.

So what if you’re looking for a litter box that’ll make your scooping duties easier, but you’re not ready to fork over a few hundred dollars to get an automatic, self-cleaning litter box? We are now seeing some nifty litter box designs on the market that might be the perfect solution for you.

The most popular rolling litter box on the market is the Omega Paw Self-Cleaning Litter Box. This type of litter box requires a great deal of floor space. In order to clean the Omega Paw Roll’N Clean Litter Box, you’ll need to roll the entire box approximately 180 degrees to the right, and then back to its original position. Clumped litter will be collected in a waste drawer and the remaining clean litter will pass through the sieve. Check out the full Omega Paw Self-Cleaning Litter Box Review here.

Most healthy cats won’t have any problem accessing any of the litter boxes on the market. But if you have an elderly, disabled, or obese cat, you’ll probably want to pay attention to the height of the litter box entrance. Since jumping is often too difficult for these cats, you’ll want to make sure the entrance is low enough that your cat can easily step into the box. We recommend finding a litter box with an entrance that’s 6” or lower.

The Nature’s Miracle High-Sided Litter Box has an entrance height of 5”, which makes it about the lowest we’ve seen. The Catit Jumbo Hooded Cat Litter Pan, the Tidy Cats BREEZE Litter System, the Pureness Giant Cat Litter Pan and the IRIS Open Top Cat Litter Box are a few others that have openings approximately 6” off the ground.

So your cat probably isn’t going to be concerned with the color of their litter box, but it might mean a lot to you, especially if the litter box will be out in the open. We’ve seen modern cat trees, fancy scratching posts, and designer cat food dishes rising in popularity in recent years. Thankfully, we’ve also come across some pretty nifty litter box designs that’ll make cat owners smile.

Our favorite fashionable litter box is the Modkat Litter Box.

But if that’s too modern for you, then there are also a number of litter box enclosures that’ll make your guests question whether or not you actually have a cat!

With so many options, choosing the perfect litter box can certainly be overwhelming for new cat owners. If you’re still struggling with choosing a litter box, just put yourself in your cat’s position for a minute. If your cat had a say, they’d pick out a box that’s roomy and offers a bit of privacy. That’s about it!

Check out our Top Picks or head on over to our Litter Box Reviews. 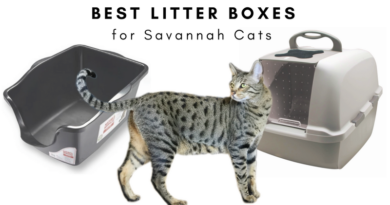 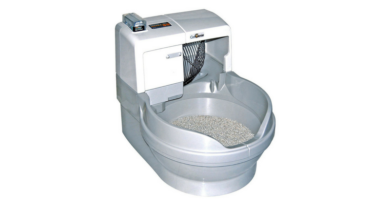