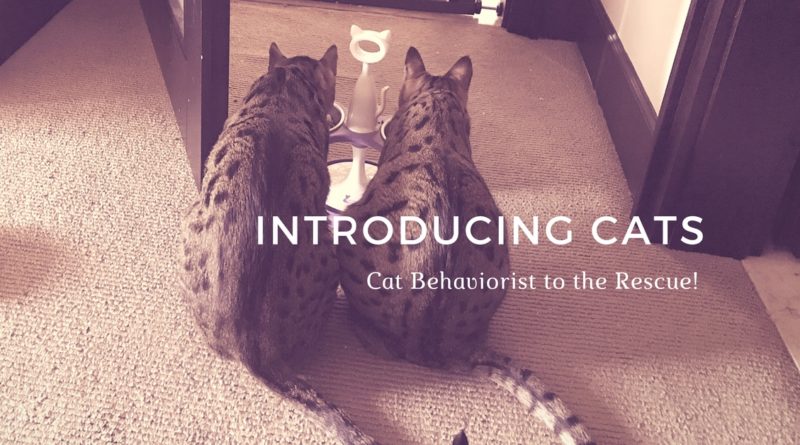 The day has finally come. It has been a month since we scheduled the house visit with our Cat Behaviorist, Dr. Curtis. To fill you in, we have a severe case of inter-cat aggression which forces us to keep our cats completely separated at all times. We’ve tried everything we can think of over the past 6 months and nothing has worked. That’s why we sought professional help from a Cat Behaviorist. We have been anxiously awaiting our meeting with Dr. Curtis. There have been 3 nasty cat fights and several instances of Puddles marking furniture in the weeks leading up to the appointment. Having this appointment on the calendar gave us something to look forward to when we’d wake up to find pee on the couch.

This whole experience has been emotionally taxing. One minute I’m extremely hopeful that Dr. Curtis will be able to work a miracle to make all our cats get along. And the next minute I’m freaking out at the thought of this not working. This is our very last resort. If for some reason she isn’t able to help us, we’ll have to live in this stressful divided home forever or entertain unthinkable re-homing options.

We cleaned up the house, locked Puddles in the master bedroom, and lured Arya and Django into the living room. Dr. Curtis arrived and was able to get a quick glimpse of Puddles before she predictably took shelter under the bed. Dr. Curtis barely had time to sit down in our living room before Arya started rummaging through her bag of cat things. And here’s how the visit went.

The Long Road Ahead

For the next two hours we went through the behavioral history form and began to uncover some of the underlying problems. Dr. Curtis was very upfront with us and explained that this would not be a quick process. She went through a similar situation when she had to introduce her 3 cats to her husband’s cat. It took them 9 months before they could all live together harmoniously. I thought, we’ve already been through 6 months, another 3 months doesn’t sound too bad. But she quickly squashed that thought. She said we’d be starting out again from square one. So we had a long road ahead.

An Underfed Kitty is an Angry Kitty 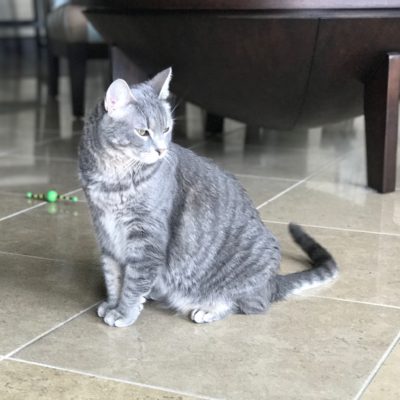 One of the first things our Cat Behaviorist uncovered was that we were very likely under-feeding Puddles. And this could be a root cause of a lot of her aggression and other behavioral problems. Puddles weighs approximately 13 pounds. I wouldn’t call her fat by any means. But after hearing from the vet that she was overweight, my boyfriend cut back on the amount of food he was feeding her. This happened at about the same time Arya and Django moved in.

Dr. Curtis explained that cats need to be able to graze and will have approximately 15 small meals a day. We told her that if we just left unlimited amounts of food out for Puddles, she would scarf it all down immediately and she’d end up being obese. Dr. Curtis said it might take her a little time to adjust, but she doesn’t think there’s a risk of her becoming obese and overeating. And even if it did come to that, I guess we’d rather have an obese happy cat than an aggressive skinny cat.

After giving a tour of the house and explaining our daily routine of site-swapping, Dr. Curtis had a few questions for us. She asked why we were doing this. Site-swapping is one of the tricks we picked up from Jackson Galaxy. The idea is to break down the barriers and territorial associations that cats have by switching their “home base” regularly. It also gives them an opportunity to familiarize themselves with the other cat’s scent. On a more selfish note, site-swapping gave my boyfriend and me the opportunity to sleep in the same bed every night while our cats got to take turns spending the night with us.

Dr. Curtis then wanted to know if it was working and if the cats seemed to mind. The truth is, site-swapping really didn’t seem to be working. If anything, it made Puddles more interested in marking territory. On nights when we had Arya and Django in the master bedroom, Django would spend at least 2 hours howling and pawing at the door to get out. Then Puddles would meow for hours in the morning to be let in. Site-swapping definitely didn’t make our lives more peaceful and Arya seemed to be the only one in the house who didn’t really mind.

Dr. Curtis had all the info she needed on that topic. She simply said, stop site swapping. It is stressing out your cats and it isn’t helping.

The site-swapping discussion transitioned into a discussion on home modifications. We told her we’d be willing to make changes to our home if she thought it would help us get our cats to not try to kill each other. We had already gone through some experimental fences in the past, but they were poorly executed.

We identified which rooms our cats felt the most comfortable in. For Arya and Django, it was definitely the guest bedroom. That’s been their home base since their first visit. When Puddles chases them, the guest bedroom is where they retreat to. For Puddles, the master bedroom and the movie room are the two areas she’s most comfortable in. She spends the majority of the day in one of those two rooms.

Dr. Curtis’s goal was to have us divide the house in two giving all cats access to their comfort spaces. We have a split floorplan with a 20+ foot wide living room between the two bedrooms. We visually identified where the ideal separator should go. In order to accomplish its goal, the divider needed to be at least 4 feet tall (so Django wouldn’t jump over it), sturdy (so Puddles wouldn’t knock it over), visually transparent, and open enough for them to be able to smell each other. Here’s what we came up with – DIY Extra Large Pet Gate.

Keep them High and Happy

Our next bit of homework was to entice good feelings whenever our cats were in the presence of each other. We could use toys, treats, cat nip, cat grass, and anything else we could think of that our cats like. 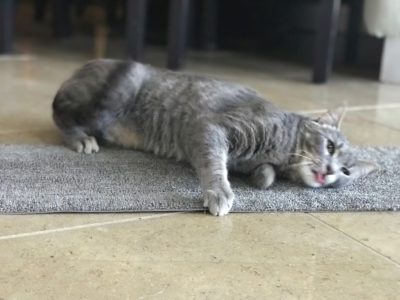 This is something we’d been doing but on a much smaller scale. There’s only so much you can accomplish with a divider the width of a doorway. Once we get the 20-foot long wall up, we’ll have much more space and a lot more opportunities to create these positive interactions.

Dr. Curtis provided us with two Feliway plugins to keep in the living room where all the interactions will occur. These plugins disperse cat pheromones into the air which are supposed to be calming for cats. We were given one Multi-Cat Feliway Pluggin and one normal Feliway Pluggin. They only last a month and they’re quite pricey. But we really aren’t in any position to turn down something that has been proven to work.

Dr. Curtis prescribed the anti-anxiety drug, Buspirone, for Puddles and the calming supplement, Zylkene, for Arya and Django. She also suggested that we try switching all cats to a calming/stress-relief diet available from Royal Canine and Hill’s Science Diet.

Before leaving, Dr. Curtis reemphasized that progress will be slow. She gave us a ton of new things to try and assured us that she’d be available for follow-up consultations. She also gave us assurance that if these things don’t work, she has other things we can try. So that alone is a huge relief. We’ll be sure to keep you posted as our journey to introduce cats continues. 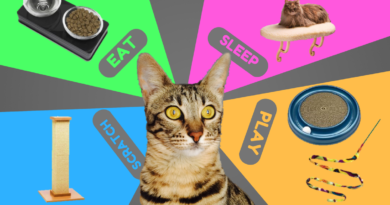 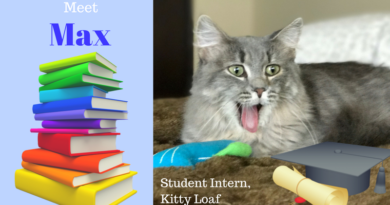 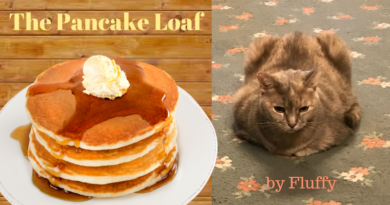 The Pancake Loaf by Fluffy

November 5, 2016 Kitty Loaf Comments Off on The Pancake Loaf by Fluffy