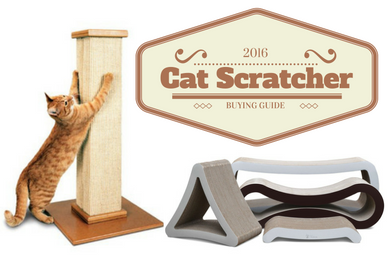 We already know that scratching is normal cat behavior. Cats scratch for a variety of different reasons. They do it to stretch. They scratch to remove the outer layer of their nails. And they scratch to mark their territory. Scratching is instinctual to cats. So don’t waste your time trying to train your cat not to scratch. Instead, invest some time and money into a good cat scratcher (or several)!

How Many Do I Need?

Ideally, you should have a cat scratcher in every room that you and your cat spend time. That might seem excessive, but if you cut corners here, your designer furniture and carpets will likely pay the price. You won’t necessarily need to break the bank to find quality scratchers. Some cost as little as $5. They might not last as long as the $50 ones, but a lot depends on your cat. 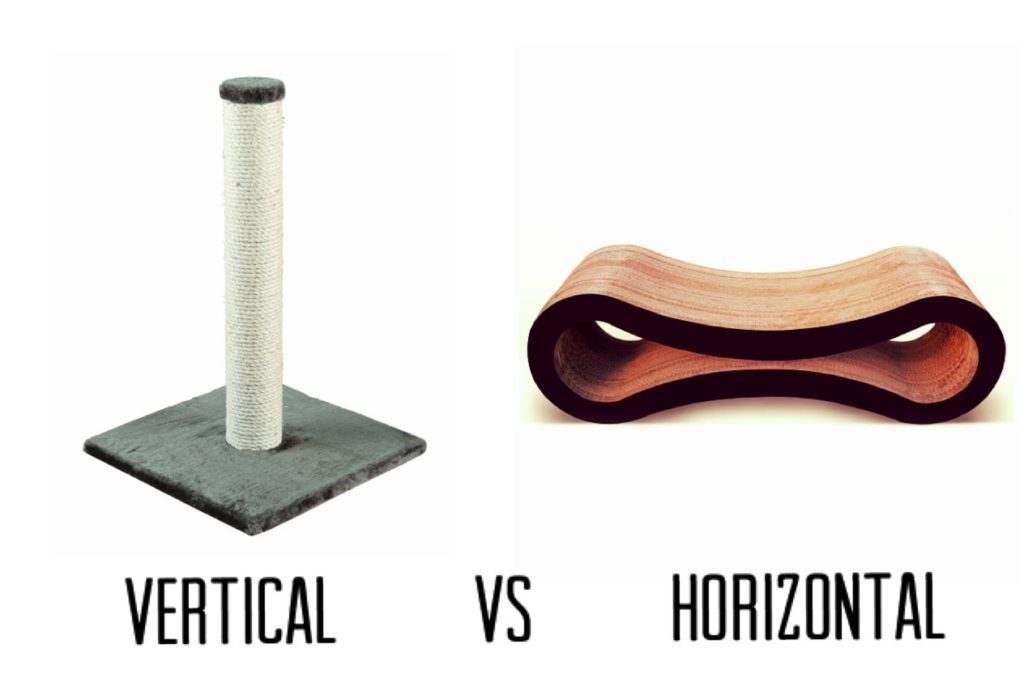 Cardboard vs. Sisal vs. Carpet

The two main materials that modern day cat scratchers are made of are sisal and corrugated cardboard. Thankfully, pet product manufacturers have wizened up and have largely stopped using carpet as a cat scratcher material.

A carpet scratching post will encourage cats to scratch carpet. So if you don’t want your cat scratching your expensive rug, avoid carpet scratchers at all costs! The price might be lower than the next material option, but it won’t be worth it in the long run.

Sisal is a tough plant fiber that is used to make all sorts of products including twine, dartboards, carpets, spa products, and most importantly – cat scratching posts. In the cat scratcher market, you’ll mostly see sisal rope that is wrapped and stapled or glued around a post. Sisal rope is very dense and generally holds up pretty well over time. After extensive use, sisal rope will fray and eventually shed or become unraveled from the post. Woven sisal or sisal carpet is a newer product on the cat scratcher market. Woven sisal is typically glued or stapled to a post. It has a rougher texture than sisal rope which makes it more satisfying for cats to scratch. Woven sisal also has a much nicer appearance than sisal rope, and holds up better over time.

One of the most economical cat scratching materials on the market is cardboard, specifically corrugated cardboard. Cats love scratching cardboard because it is easy to shred and makes a satisfying noise. There are varying levels of quality, thickness, and durability for corrugated cardboard cat scratchers. Some cardboard scratchers will wear out in a month or two while others are made to last several years. The price is generally a good gauge of quality and longevity. Aside from the short lifespan of corrugated cardboard, the other main drawback is the mess it leaves when cats shred it. The cheap cardboard scratchers will begin shedding cardboard flakes almost immediately. But even the high-quality ones eventually wear out and leave debris for cat owners to clean up. 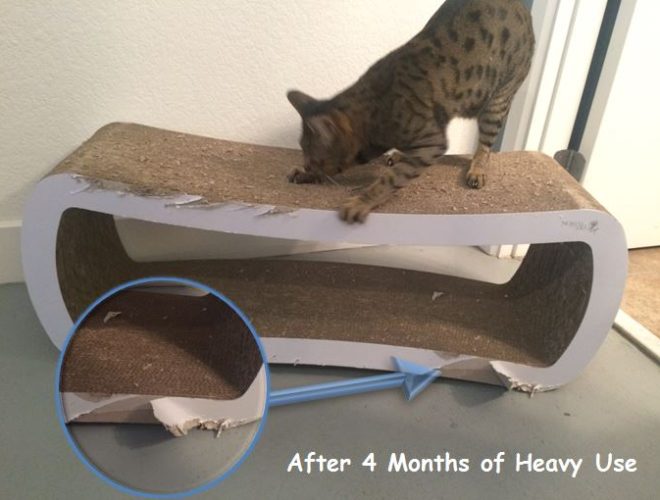 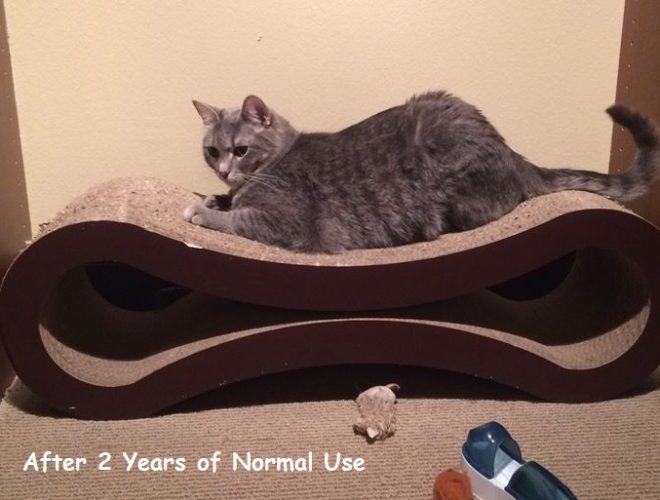 There are a few more things to consider before purchasing your next cat scratcher. Scratcher orientation and even the scratching material are of secondary importance compared to these two factors: Size and stability.

One of the main reasons cats scratch is to stretch out their muscles. And in order for them to do that they’ll need a cat scratcher that is large enough to accommodate their fully stretched out frame. It’s unfortunate that most scratching posts on the market are way too small to be of use to grown cats. For the average sized cat, your scratching posts should be at the very least 24” tall. Our top-rated scratching post is 32” tall (SmartCat Ultimate Scratching Post). And the tallest scratching post we’ve seen is the MidWest Feline Nuvo Grand Forte Scratching Post at 41″ tall.

Stability can be a factor for wall-mounted scratchers, horizontal scratchers, and most commonly scratching posts. If it wobbles or moves around when your cat scratches it, chances are your kitty will not come back for a second go. The taller the scratching post, the less intrinsic stability it will have. So make sure your scratching posts have large enough bases to resist wobbling or toppling over. Make sure wall scratchers are securely fastened. And invest in some sticky feet for horizontal scratchers if they slide around on the floor when your kitty is using them. 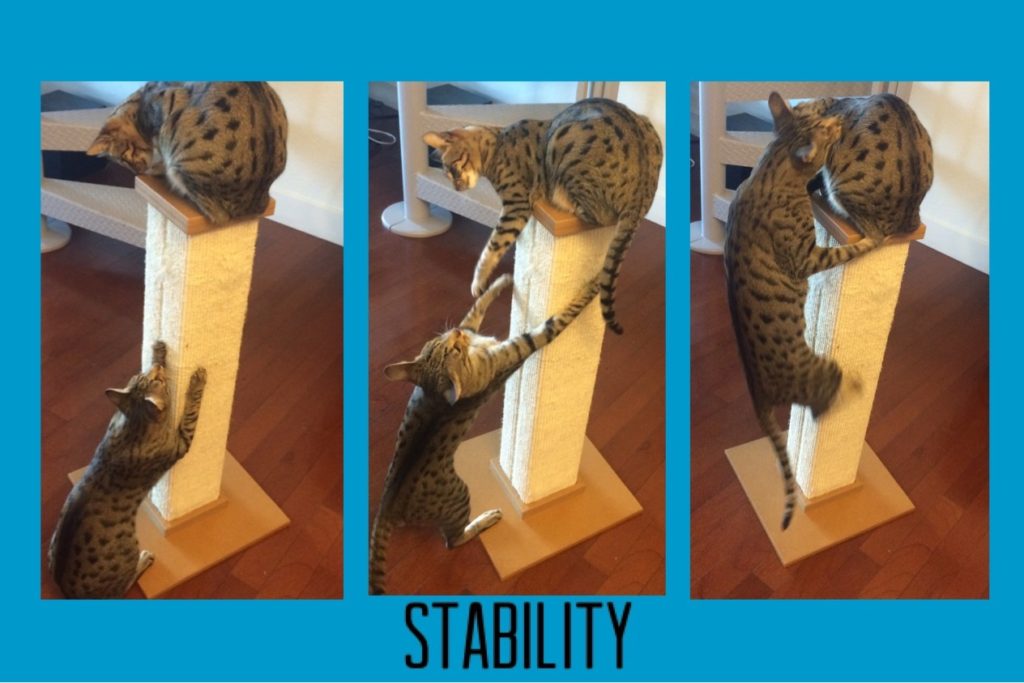 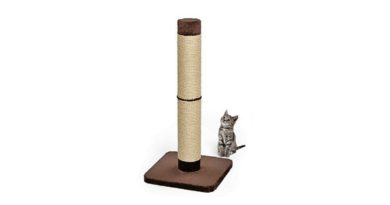 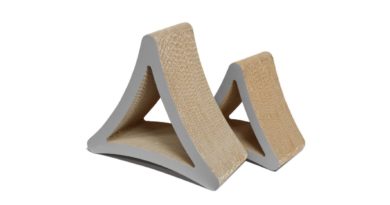 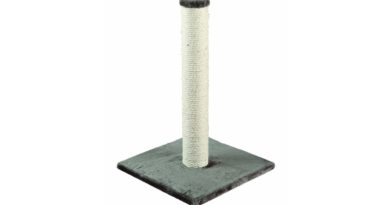